Throughout all her singing, along the paths of blocks as many as verses, crossings theirs, S.N. pours voice as seemingly directly as the first pressing of thought, though this be a video of a recording of a choice of a version of a writing of a setting of a series of a wording, and even this video, a choreography of a process of a slowed motion of a sped playback of a single take of an air. S.N. is the mystical apparition of a black pillar, a guide, catalyst, absence, emission, flow. And so sings; sings so, with what can only be recalled as eyes held closed, despite the obvious reality to the contrary: if we are to more tightly recall, as if she is to more tightly close her eyes, her eyes blink open: certainly we glimpse them opening at a step, to turn a corner, to cross the block, to avert the passers-by, sure as certain. But in the ease of recollection as slowed by the inverse speed of a frame rate slightly hastened before those eyes, they are only closed fringed crescents. 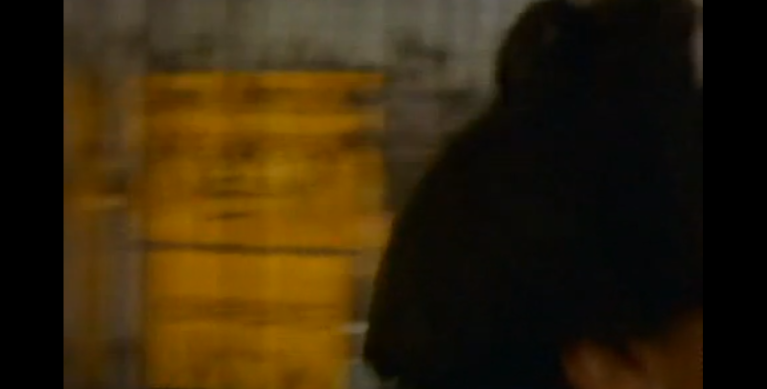 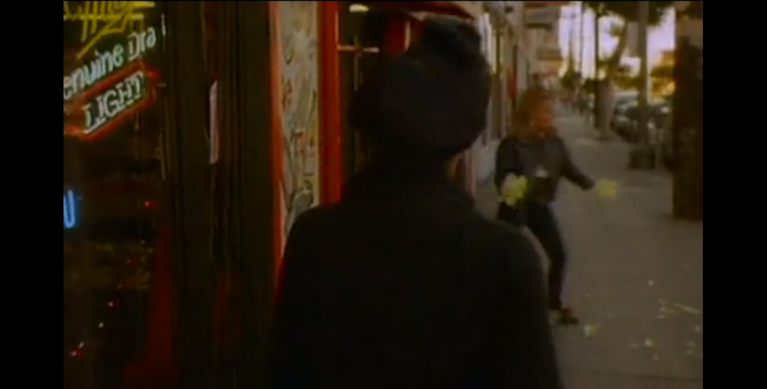 If one were given the task of figuring “inspiration”, this would be one. What is limp in those two is pitched in the two of her cheeks into which they appear to somehow flex, or the pent up of that hair, that divided spire itself.

In turn, that crown, and the emanation the thrust of her unstoppable movement embodies (the troubled ordering of these words faces the con-fusion of the embodiment of this body, the body of this embodiment), resonates with whatever of inspiration resides in the inward, the held, the in-spired. Despite the unavoidable architecture of spires, the figures of inspiration, then, would have to be the opposite of even the internally scaffolded, buttressed, erected. Her lashes permit the escape of a gaze that, evidently even on lifting open, does not escape for not even being there, looking, out of those glazed balls, withdrawn instead into the movement-to-where.

On this count, 9 figures – representative of the fullness of the infinite beyond number – are found in the aspect of the gaze (dṛṣṭi) accompanying yoga asana practice: gazes to the middle of the thumb (Aṅguṣṭhamadhye), middle of the brow (Bhrūmadhye), tip of the nose (Nāsāgre), tip of the hand (Hastagrahe), to the left and to the right sides (Pārśva), upwards (Ūrdhva), to the magical navel-circle (Nābhicakre), and to the tips of the feet (Pādayoragre). So figured, beyond the in-spiration of each gaze, the energy of the spiring look held during, it might be seen that all movement re- and tran-sides in that between gazes, between spirations.

Inspiration behind lids is then always already and ever invisible; indivisible, unable to be halted; isolated. Certainly it has the gradation of origins and recedings, but the tapered conical or pyramidal structure is only the outward exterior of a spir, a sprout, shoot, or stalk of grass (Old English), denoting a rather more spherical form (though never a dome, which appears only the outward exterior of a flat square, squinched, the flat opening of the threads of smoke escaping, or … ), a peak contained which nevertheless rises and falls. 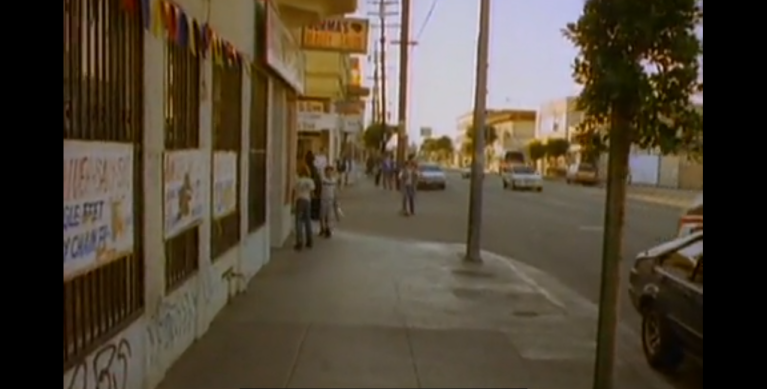